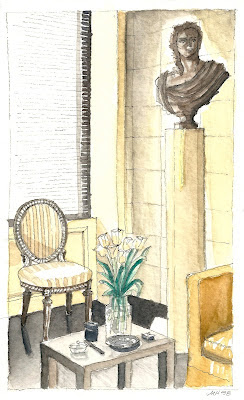 Last night I learned about the passing of the great Albert Hadley after reading the eloquent and lovely tribute from Jennifer Boles at The Peak of Chic.

After the initial shock began to wore off I found myself already beginning to feel a void in the creative side of my life. His work has played such an important role in my own work and his passing definitely feels like the end of an era.
Fortunately, he has left such a wonderful legacy through his work, which has been so well documented. Also, the numerous great designers such as David Kleinberg, Brian McCarthy, and Jeffrey Bilhuber, to name a few, are carrying on the torch of Albert’s style and influence in their own work.
I had the great opportunity to meet him at a lecture and book signing that he gave several years ago at the Corcoran Gallery of Art in Washington DC. If only I could have spoken to him longer so that I could tell him how much I appreciate all that he has done for the design world and what a amazing role he has played in inspiring my own creative evolution .
He will be greatly missed by many, especially the fortunate ones, from colleagues to his many clients who were simply lucky enough to experience his greatness first hand.
But as I move forward in persuing my own vision I will often have one question in the back of mind as see an empty room for the first time. What would Albert do?