The Temple of the Four Winds-Castle Howard 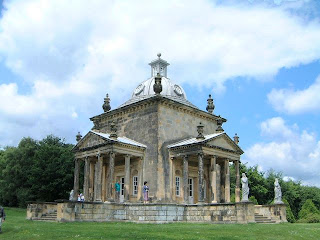 It was an unusual way for me to find one of my subjects to paint. Normally I select my subjects from books or from my travels. But I discovered the Temple of the Four Winds as I was watching the original film version of Brideshead Revisited with Jeremy Irons. It was a later scene in the film that included a conversation between Charles Ryder (Jeremy Irons) and Julia Flyte (Diana Quick)as they stood under the portico of the temple.
I was immediately drawn to the romantic appeal of the building, which was appropriate for the scene. The building is a part of Castle Howard in North Yorkshire, England. It is one of the grandest of the surviving country estates of England and it is still privately owned by the Howard family.
Originally known as the Temple of Diana, it was designed in 1724 by the architect, John Vanbrugh (1664?-1726). Palladianism had reached an all time high of popularity in England at the time and the temple is inspired from Andrea Palladio’s famous 16th century Villa Rotunda in Vicenza. The temple was not completely finished until 1738, almost twelve years after Vanbrugh’s death.

It could easily be recognized as a folly but it was actually used for refreshment and reading. The cellar below was used by servants to store and prepare food before being served to its many guests.

I am drawn to the severe and structured baroque detailing, the heavy rusticating, and the strong neoclassical portico’s, contrasting with the lifelike and delicate sculptures above the steps. The carved urns above the portico’s and on the four corners of the building are particularly extraordinary.

Since I have not been fortunate enough to visit Castle Howard and the Temple in person I have to rely on many assumptions and other previously measured details for creating the scaled under drawing.