Ever since I was a little boy, I can remember being fascinated by anything in miniature form. I have no shame in admitting that I adored dollhouses and was jealous of all of my girl playmates who had them. I found myself rearranging the furniture inside and trying to create imagined stories about the people that lived in them. Shocking how I ended up being an interior decorator!
As I grew older my love of dollhouses began to wane but my passion for architecture began to reveal  itself and so it came with no surprise that I became obsessed with architectural models. I have yet to start a collection of my own since I have found that they are rather difficult to come by. But someday I hope to find something that will start my collection. The example below would be on the top of my list! 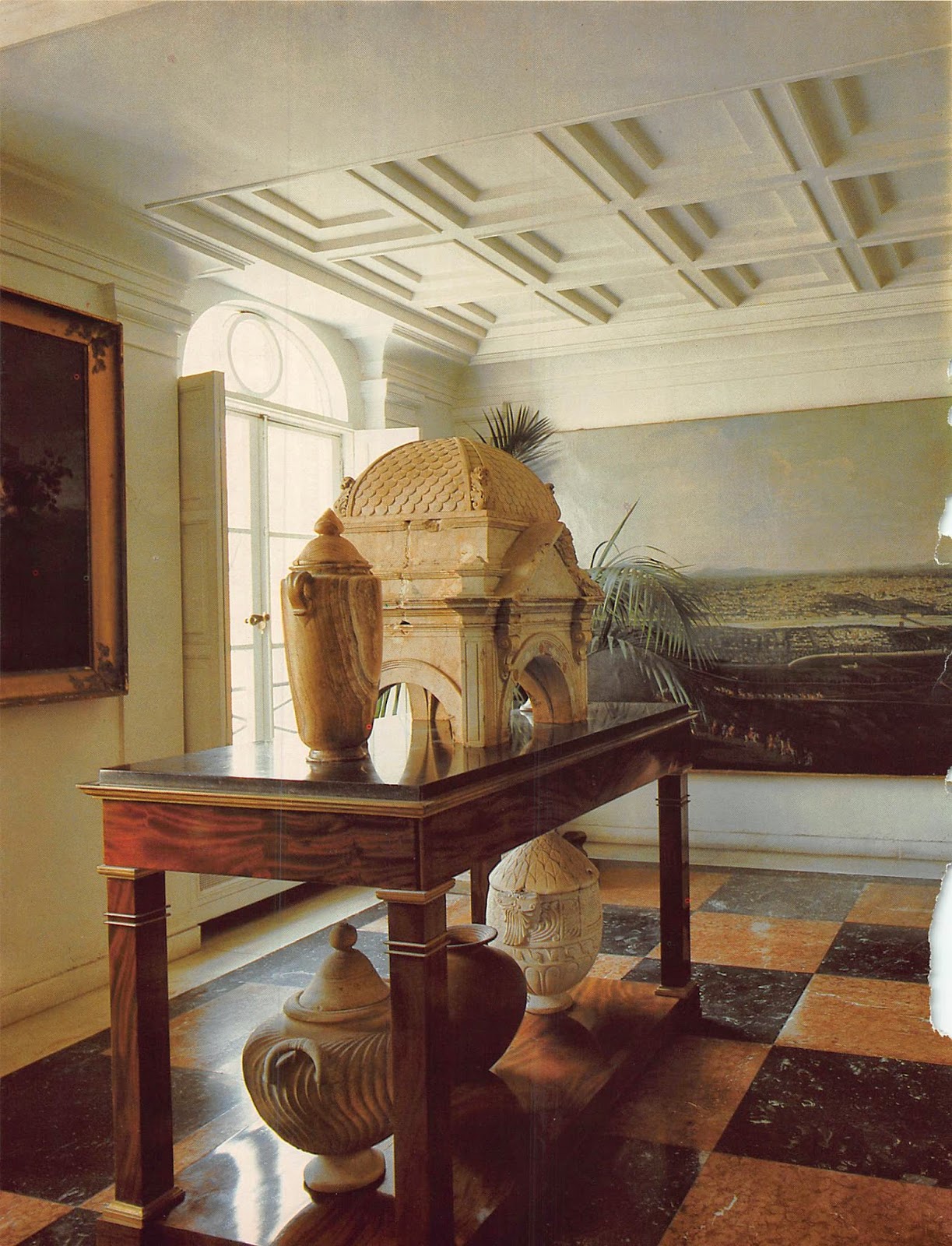 An Athens entry hall is dominated by a model in plaster or stone depicting a domed neoclassical pavilion with triumphal arches and bracketed pediments. The roof detail on the model features fish scale tiles.
World of Interiors May 1993
Photography- James Mortimer 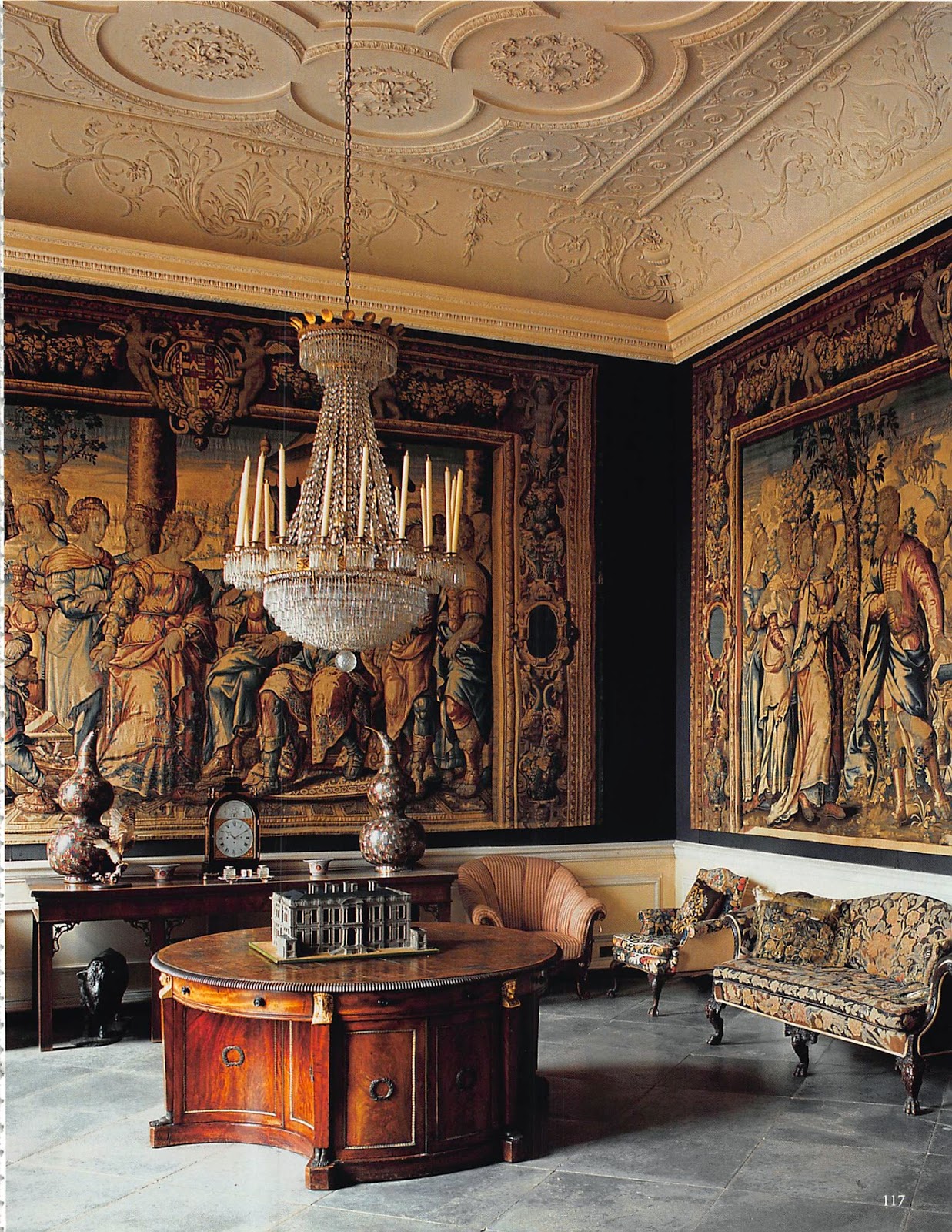 This grand entrance hall at the estate of East Neston in Northamptonshire, designed by architect Nicholas Hawksmoor, greets you with a Regency center table and a architectural model of the house.
World of Interiors June 2005
Photography- Christopher Simon Sykes 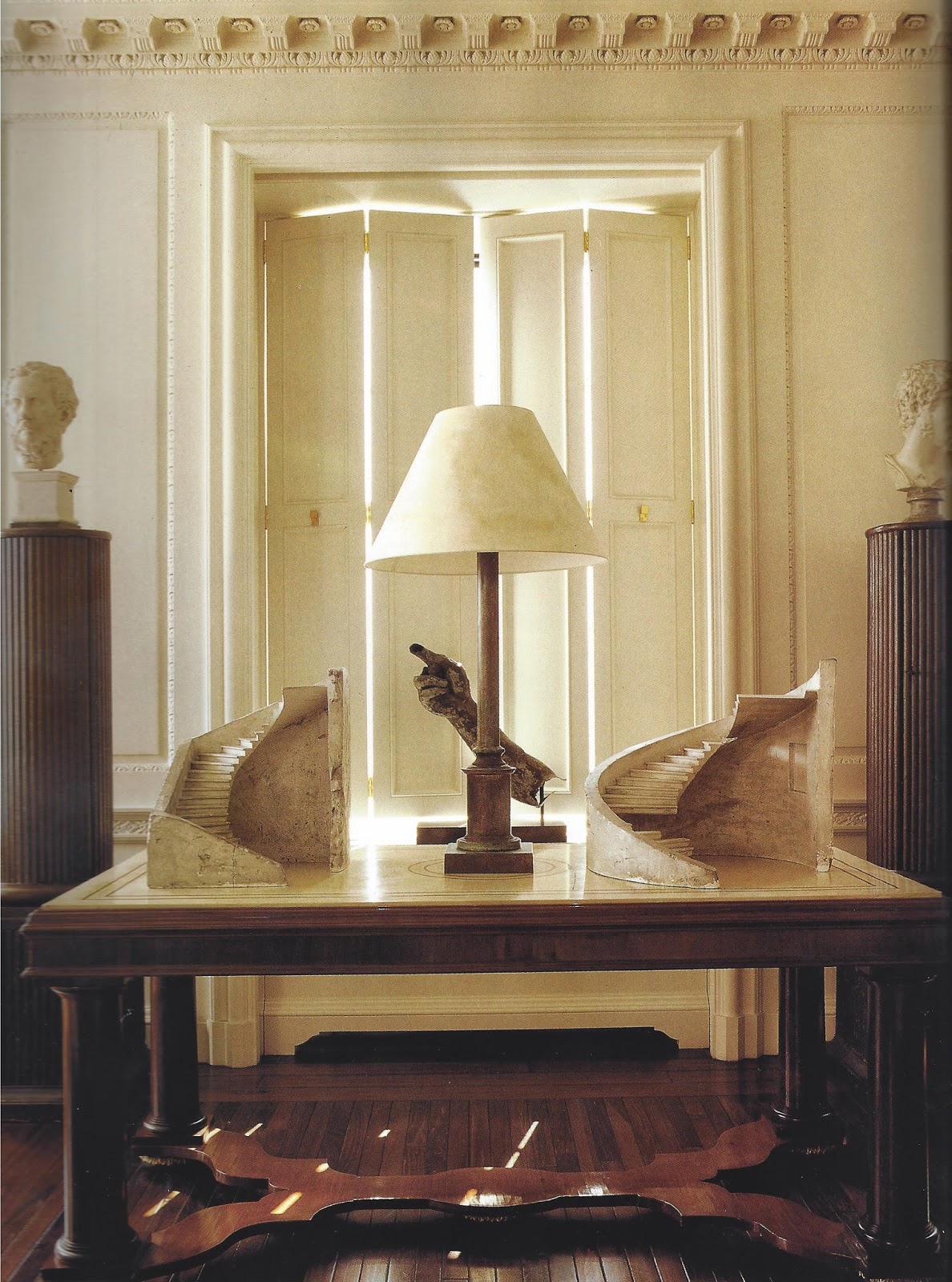 Bill Blass assembled an extraordinary collection of models from these plaster and wood staircases to the miniature bronze model of the Vendôme Column in Paris. 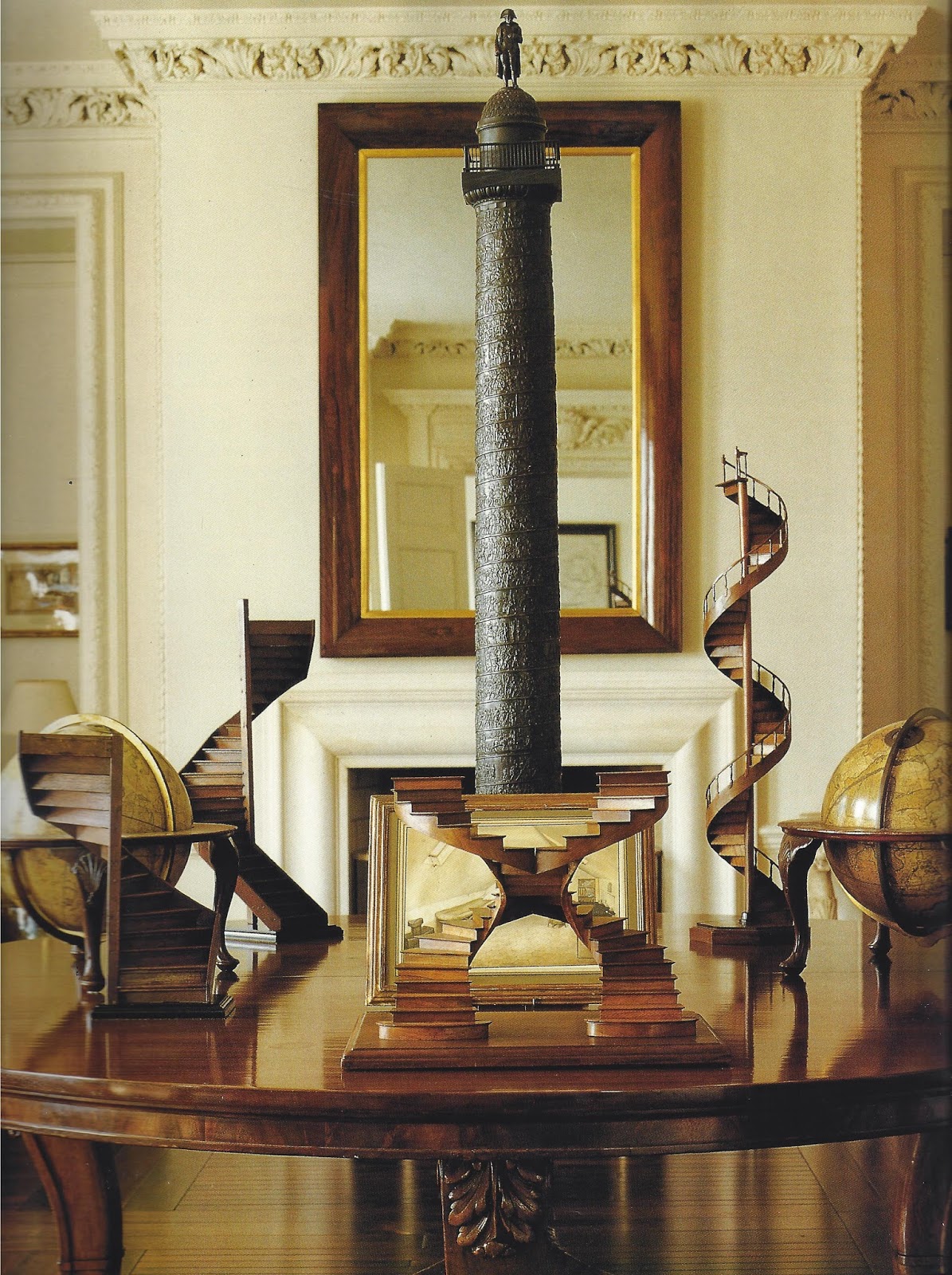 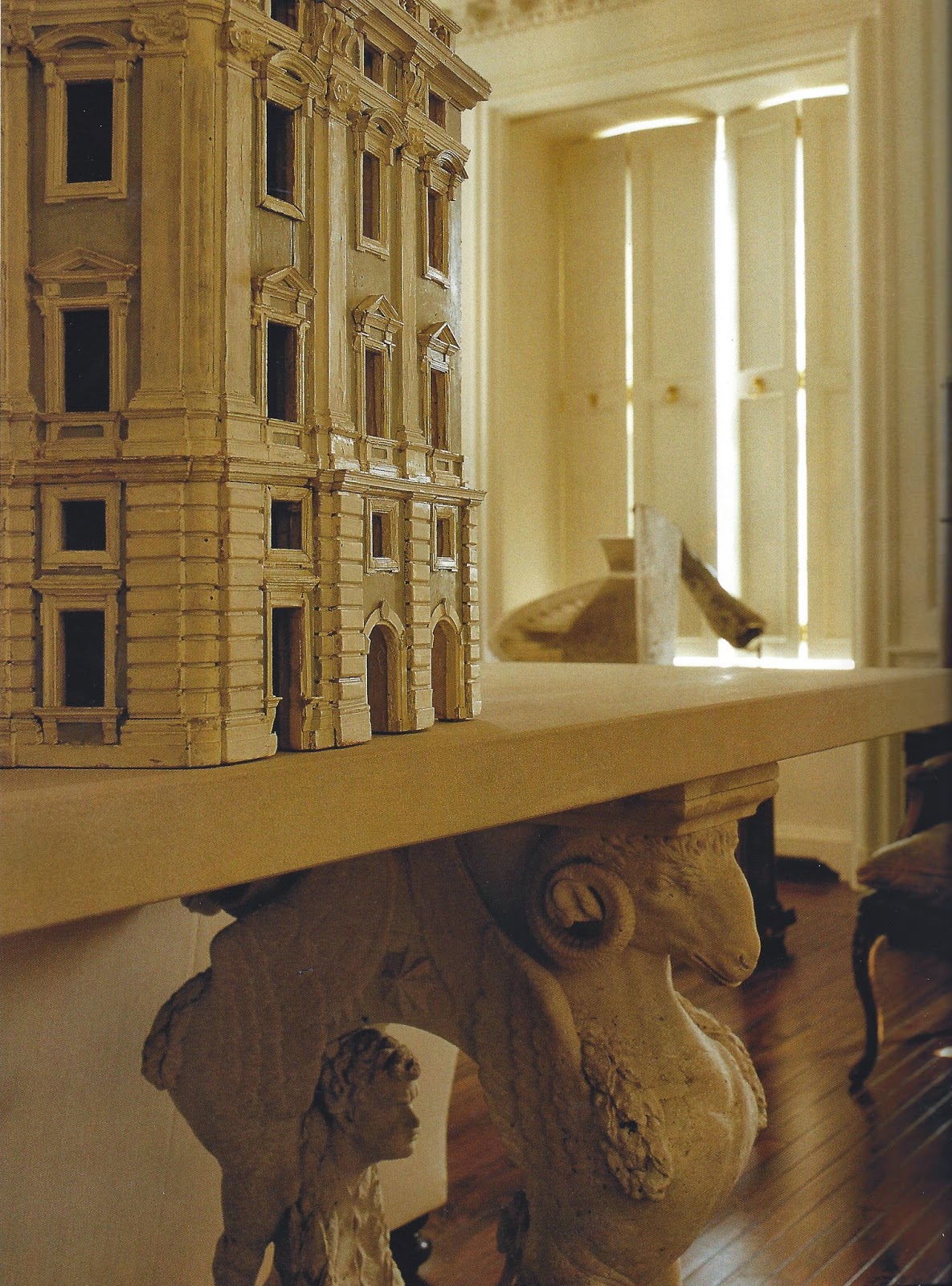 A painted wood model of an Italian Palazzo, also from the apartment of Bill Blass.
The photos of the Bill Blass apartment were included in the book Classic Style by Judith Miller with photography by Tim Clinch. 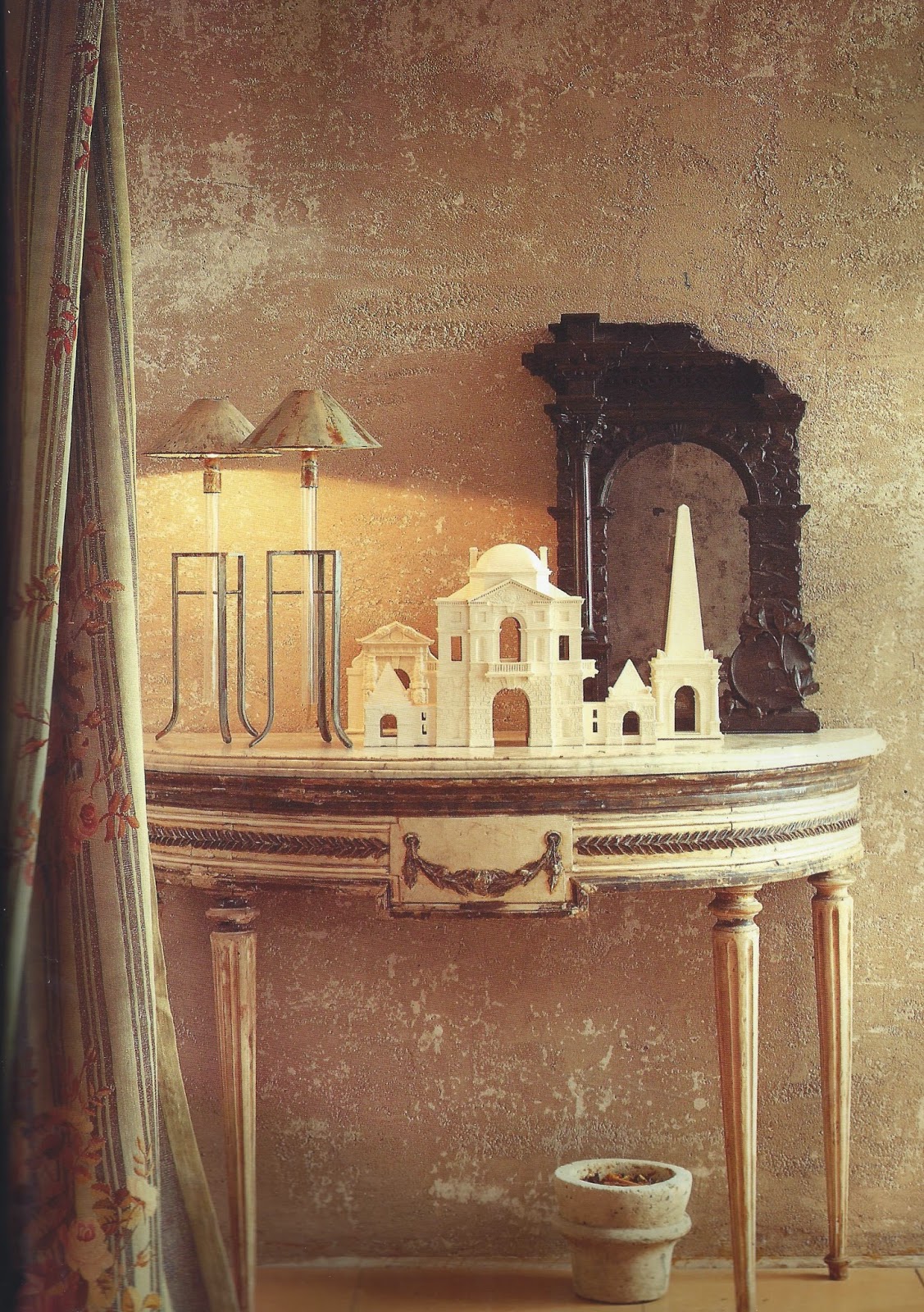 A miniature plaster model of the Worcester Pavilion at Badminton in a entry hall by John Saladino. Coincidentally, I depicted the pavilion in a recently completed painting.
From The Decorator by Florence de Dampierre. Photograph by Peter Paige. 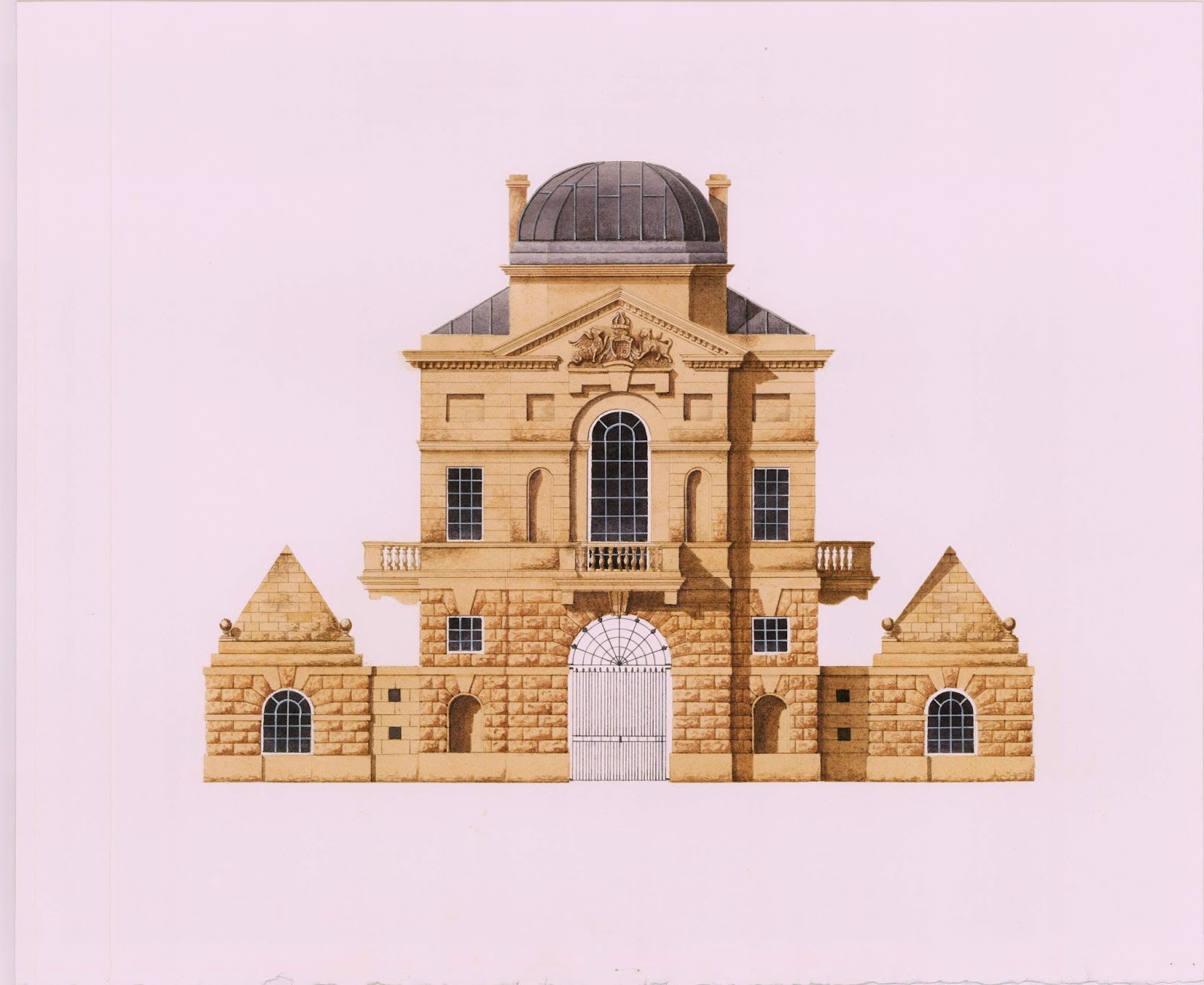 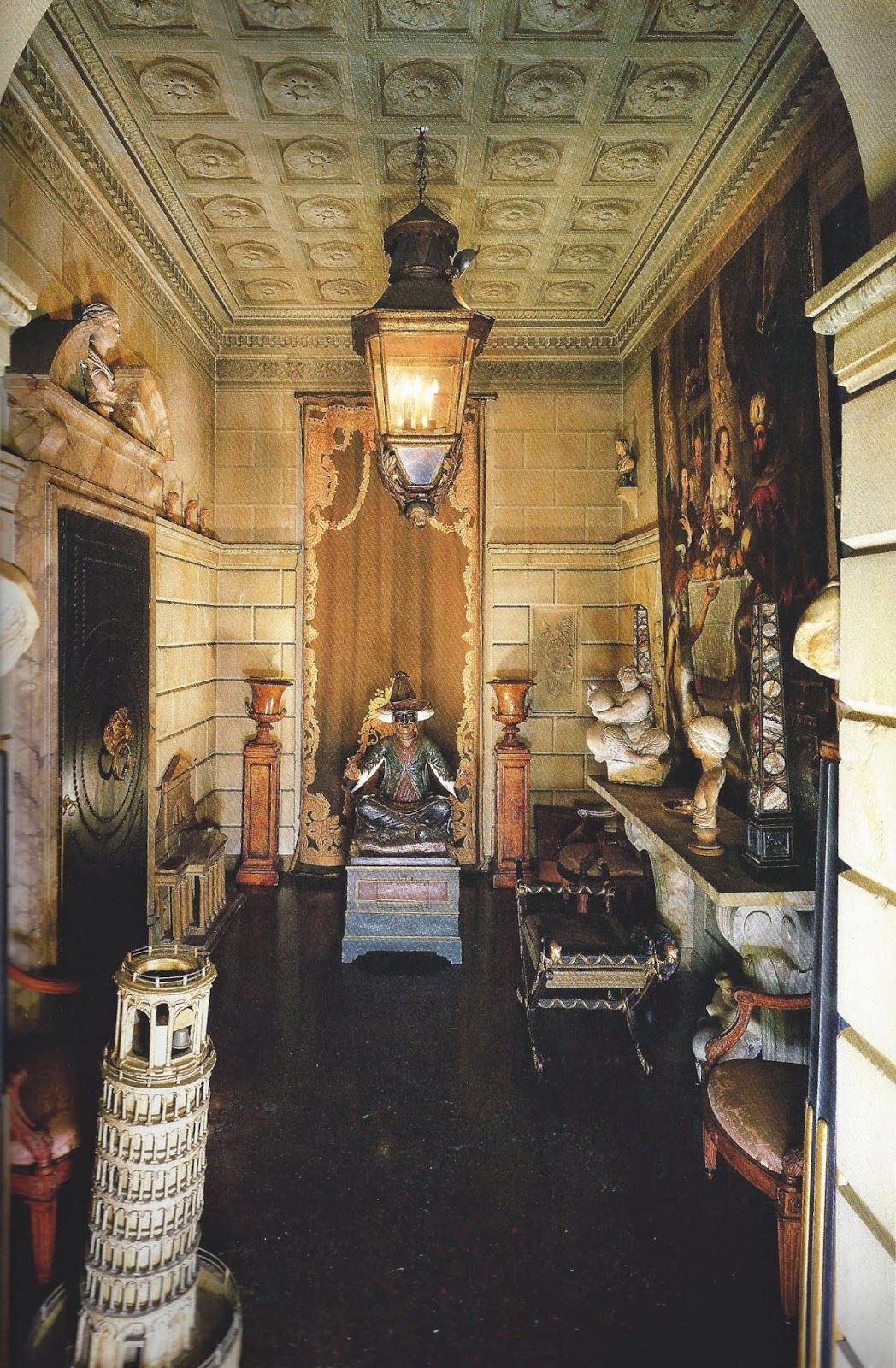 Mongiardino designed this entrance hall, which contains a mix of interesting curiosities, including a model of the leaning Tower of Pisa. 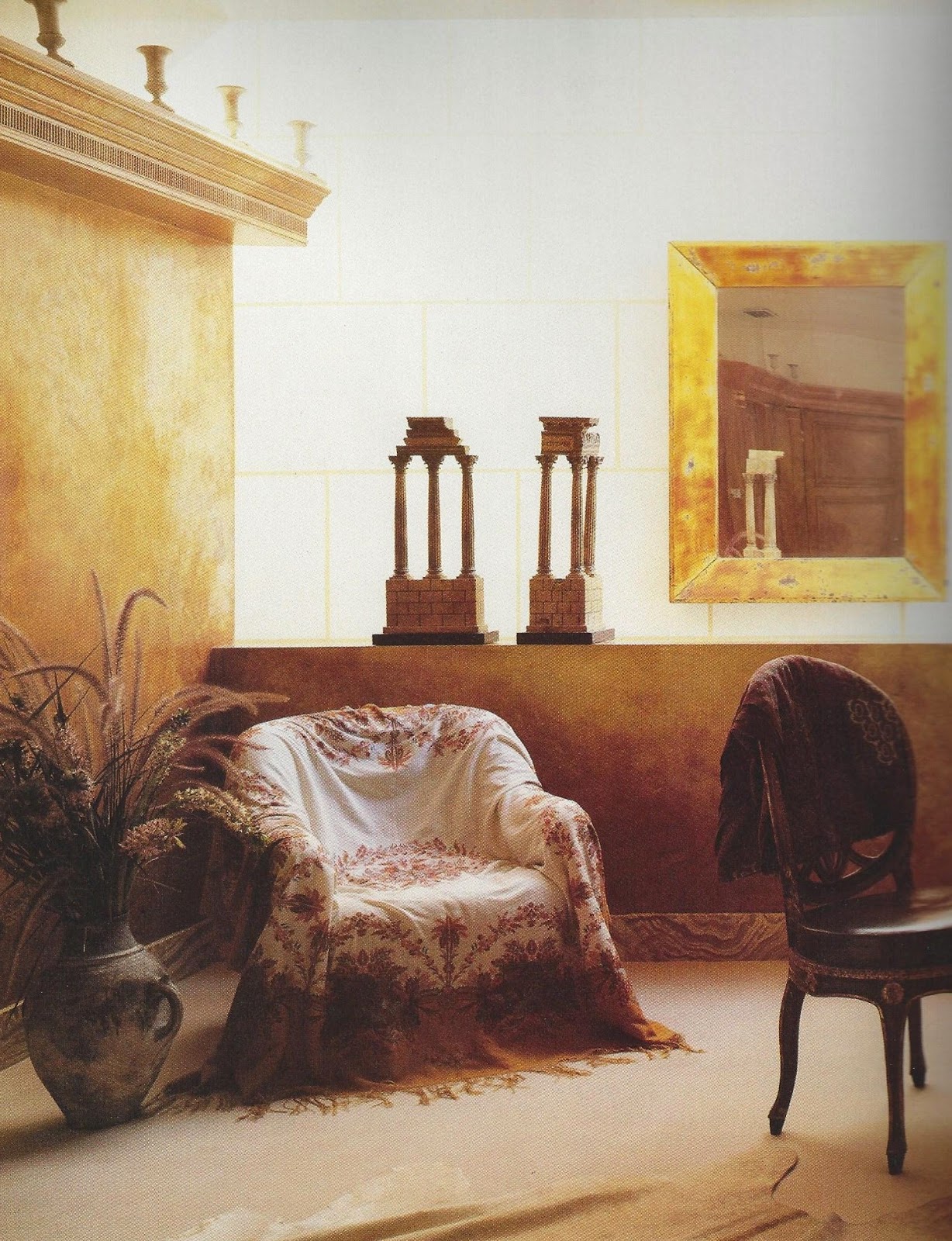 A pair of Grand Tour models from the Roman Forum in a light and etherial room by Stephen Sils. 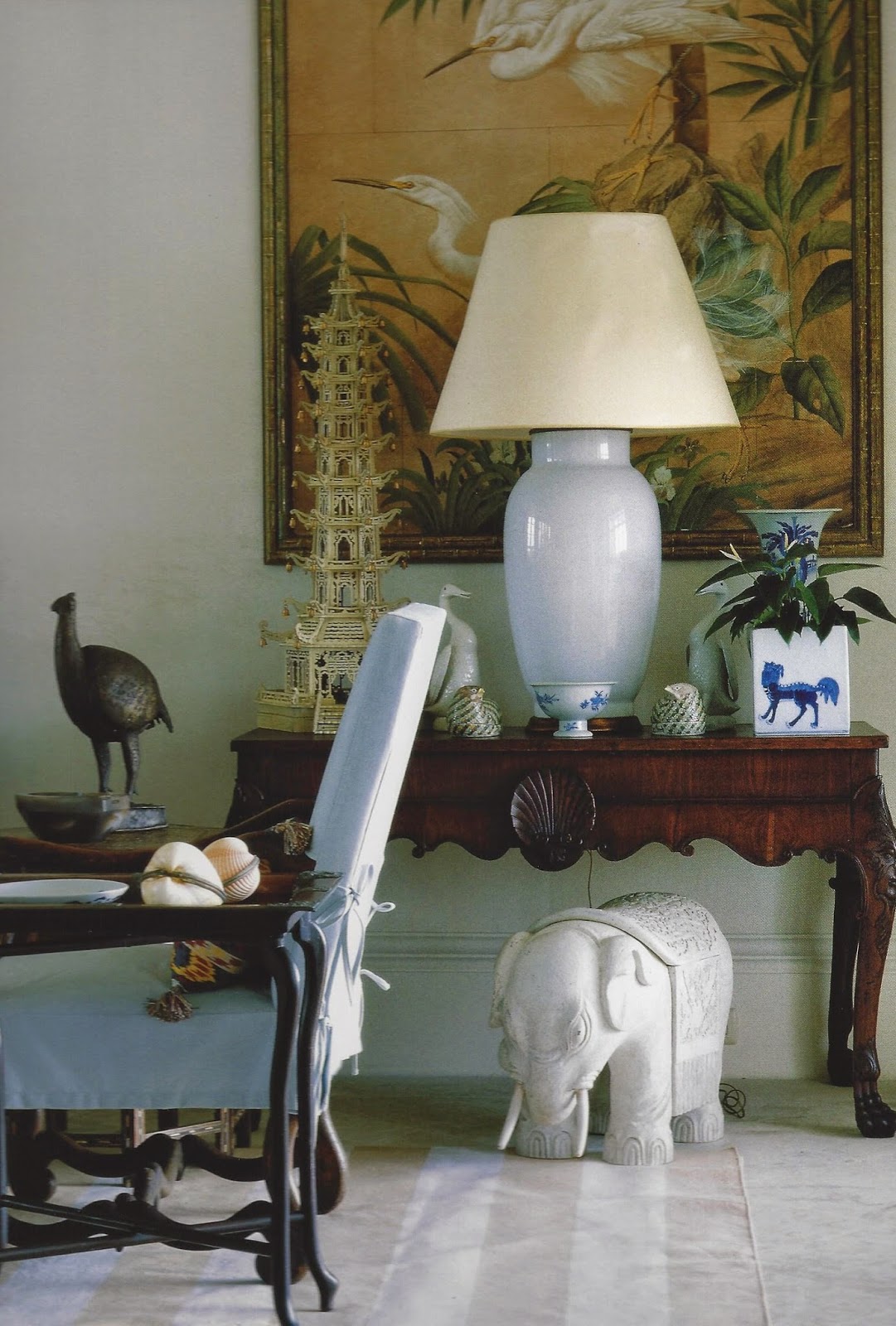 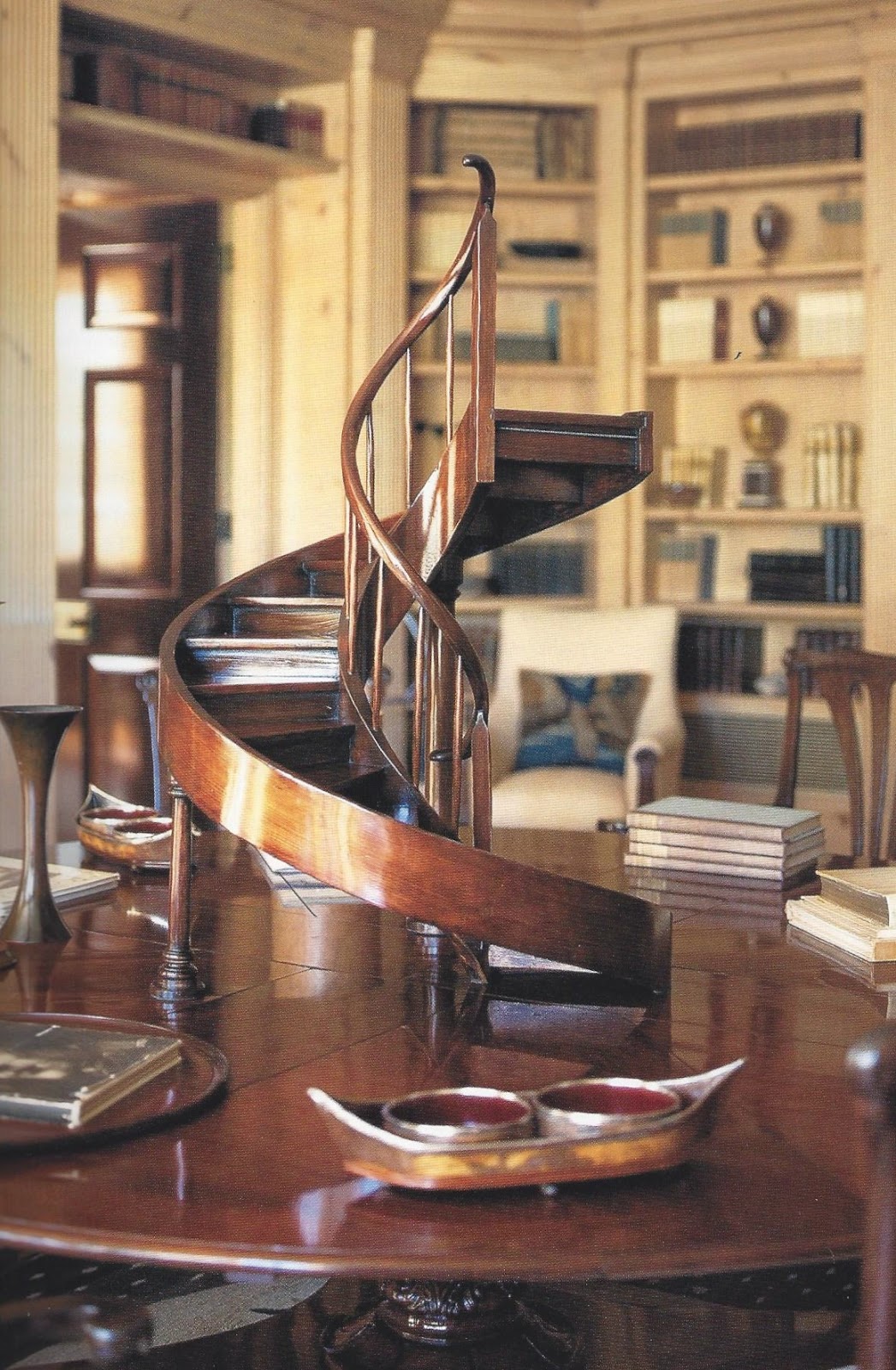 A curved mahogany staircase model in a paneled library decorated by Rose Tarlow. 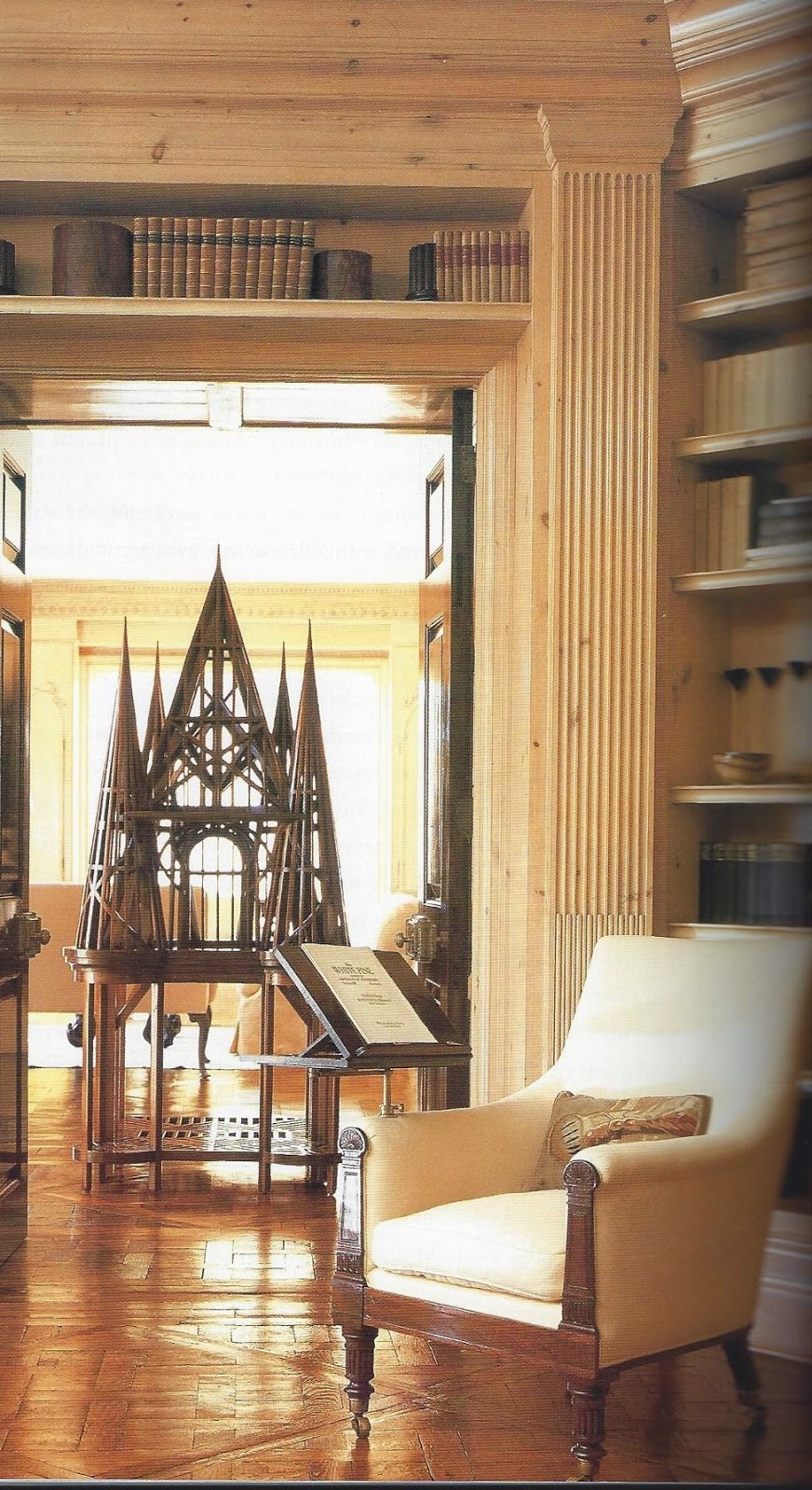 Almost resembling a medieval or gothic birdcage, this model of a roof steals the show in the same library decorated by Rose Tarlow.
Both photos from The Private House by Rose Tarlow. Photos by Tim Street- Porter